In June 2017, I adopted these 3 orphans when they were just 2 weeks old. Having been alone for 3 days, they were in rough shape.

After bottle-feeding every 2 hours for a couple of weeks, however, I was in rough shape, but they were beginning to thrive.

These feisty little fur-balls took over my home as well as my heart, but as construction work on my home addition began, it was necessary to keep them confined to certain areas for their own safety.

Keeping them contained proved to be very difficult, especially for Mo, being the little “Houdini” of the bunch. She was always the first to make the great escape, being as nimble as a monkey at climbing everything. Once Mo led the way, Larry and Curly were quick to follow. And they were all fast!

This led me to purchasing a large cat cage, which I furnished with a couple of hammocks, a small cat tree, litter box, and a water bottle. It was their very own little bedroom where they slept at night, and whenever I was not able to supervise them to keep them safe and out of trouble.

As they grew into juveniles, their unique personalities began to emerge. It also became apparent they each had developed little quirks, likely due to losing their mother at such an early age.

Larry developed a habit of trying to nurse on everything while cuddling, and would drool continuously. He would try my clothes, hair, whatever he could get his mouth on, even though he was repeatedly denied.

He eventually settled for a couple of stuffed toys for a pacifier. But these alone will not satisfy him. He insists on being held while he is sucking on them, and then he will fall asleep in total contentment.

Though Larry is a young adult now, it is not likely that he will ever outgrow this quirky habit. But he is loved just the same.

He is quite goofy by nature, always entertaining me with wild antics that often end in hilarious wipeouts. One of his favorites activities is zooming around the house at top speed for no apparent reason. If only he would learn to look where he’s going…He’s not very graceful for a cat, yet he can appear quite regal when he poses.

Curly is more of a loner, though she does enjoy snuggling and being pet, but only when she wants it. If you try to pet her at other times, she dodges and runs away, then gives disgusted looks as if to say, “How dare you touch me”!

Curly began her nefarious claim to fame as a car thief, stealing small cars from an old toy box. She has since graduated on to bigger and better items, such as bags of powdered sugar or coconut flakes from the kitchen cabinets. And each morning is now a game of “find the slipper” for me, as she always hides one.

Curly is, in my opinion, the toughest of the bunch, as she can take a punch as well as deliver one. She not only holds her own in wrestling with Larry, often times whooping him, but she is also more than willing to take on the advances of an 85 pound German Shepherd. (More than once Frodo has come running into the living room with Curly’s claws attached to his neck while she’s hanging by her teeth from his chin.) She reminds me a bit of a fox…smart, sneaky, and beautiful.

Mo may have started life as the weak little runt of the bunch, but her endearing qualities include weaseling her way into whatever nook or cranny she pleases, especially folks hearts.

As a young kitten, Mo developed a fondness for exploring everything, looking for places to hide. One of her favorite places was inside my friend Melissa’s hoodies. Mo would climb up under Melissa’s hoodie and usually pop out from the top. But occasionally she would get lost and take a different path.

Mo is the bossiest and most demanding of the crew and she knows how to get her way. When she wants my attention, she settles for nothing less than 100%. In order to make sure of this, she plants herself right in my face so that I can’t see anything but her. I’m also not allowed to talk to anyone else during her snuggle time or she will (gently) bite or smack me, then walk away in disdain.

Her version of cuddling is to nestle her body on my chest with her face planted hard against my nose, as she kneads my throat with her paws. This, of course, requires keeping her nails trimmed short to prevent removal of my flesh, which by-the-way is very uncomfortable. While she is contentedly busy punching me in the throat, she also drools profusely, soaking both of us.

Mo rules the roost with her sweet and sassy disposition, yet with just enough humble charm to get away with it.

Now that she’s grown up (and outward, which earned her the nickname “Wide load”), she no longer fits into the small spaces she once did. But she still manages to find suitable places to park herself.

If you enjoyed reading these little introductions to my current clan, you might also like Crazy Critters #1 which is the first book in a series of compilations of short stories about the crazy and often hilarious antics of animals, available on Amazon. 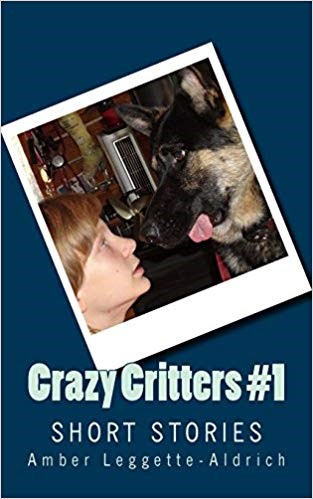 Well, that’s it for this week. I hope everyone has a lovely and fun-filled weekend! Be sure to subscribe to my email list to receive the monthly newsletter with more exciting news and special offers. You can subscribe by clicking here.

See you next week! – Amber

“Live a life worth living, a life of integrity. Be real, kind, helpful and wise, always with an attitude of gratitude. And whatever it is you do, give 110% effort to it, even in the little things”. – Amber